The Race, is a multi-disc 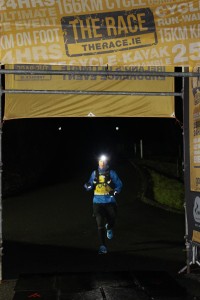 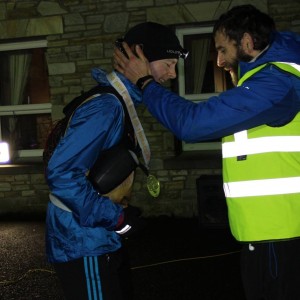 Anyway, into the park, and a downhill section, so I decided to take advantage, and run for a bit. That didn’t last long with my feet, but I did a kind of run / shuffle that would have been embarrassing, if it wasn’t after midnight in the middle of a national park, and there was no one for miles. I lost all sense of direction in the park, and after another several hours, I arrived out to meet some more marshals, who told me that I still had 19k to go. WHAT? On I shuffled, and maybe 2k later I passed one of the race signs, telling me I had just 20k to go. I almost lay down and gave up, but I trudged on, up yet another hill that went on for miles. At this point, I started singing to myself, out loud – my motivational songs to keep me awake and moving forward. By the way. No. I’ll never tell anyone what they were! I recalled my moment earlier in the day, kept telling myself to stay positive, and keep moving. I was becoming increasingly aware that time was ticking down towards 5am, and the kilometres were not disappearing fast enough.
Again, after more hours, I arrived out to another checkpoint, and they told me I had still 10k to go. It was about 3am at this point, so I thought as long as they are accurate, I would make it. Stay positive. I kept going, up over yet another series of hills, and after loads of twists and turns I lost my sense of direction, and I thought I was lost for some reason. I nearly burst into tears at one stage, thinking that I had come this far, but I was going to fail at the final fence. I took a right turn, and after heading down a road for several minutes, I had second thoughts and went back – I realised that I had followed a sign that was nothing to do with the race. I don’t know why I went back, but if I hadn’t, I would still be wandering around Donegal. By this stage it was a quarter past four, and time was running out. Throughout the day, I had asked a lot of my body. It had carried me around 245k of the toughest terrain in the country, but I had yet more to ask of it. I had to start running. Paul Tierney arrived in a car, rolled down the window and said that the entrance to the centre was 1.3k down the road. I took off. He called after me to tell me that it was Paul (he didn’t initially recognise me in the dark, and thought I didn’t recognise him). I shouted back, “I know, but I have to go!” Daniel got out of the car, and ran with me for a few minutes, then they got back in the car, and headed to the centre to cheer me in. The buzz was building, and the marshals were sweeping up the last of the competitors still out on the course. I passed the last marshal at the entrance, gave her a high five of thanks for staying out all night for us, and headed for the line. As I approached, I could hear the lads (some finished hours, and some not long in) and I motored over the line at what felt like a hundred miles an hour. I was very emotional, and I got my medal in the end. It was so strange – I went from being very confident early in the race, to nearly losing it all in the last hour, but I had finished in a total time of 23 hours, 31 minutes and 25 seconds.
It was a great privilege to be able to take part in such a great event, so close to home. It was the ultimate test, and I’m just glad to have finished. I couldn’t have done it without a lot of support, both at home, and from the GoTri group of fellow athletes. To everyone that followed my blue dot on the tracker, and particularly those that provided on course support on the day – words can’t express how thankful I am. I’m delighted for everyone that made it over the line, and for those that didn’t, there will be another day. Indeed, many more days. We have a great team of people interested in this type of event, and it’s a great pleasure to train and race with them. Will I do it again? Absolutely.