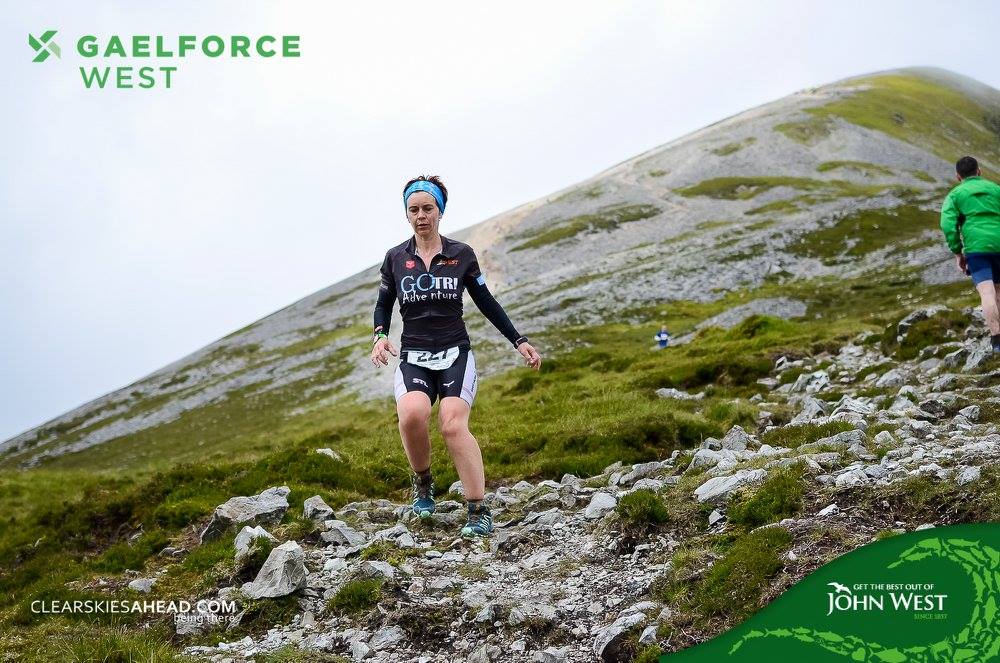 I don’t know when the idea of getting GoTri to do Gaelforce West as our team race this year was decided but as the weeks went on and more and more decided to sign up for the race it had the makings of a great weekend and one to remember. Training groups were set up and early morning friendships were made while running up the 12 O Clock hills (sorry I was too lazy to get out of bed for any of these!!). I had no idea what to expect from Gaelforce so my training involved getting out for my usual handy runs when I could and so long as the weather was ok. Oh god did I get a rude awakening at the training weekend and thank god we did it!!!! The gaelforce route was a lot harder than I expected and had me worried.
Race weekend finally arrived, there was a great buzz around Westport and the couple of drinks with the gang on Friday evening helped relaxed the nerves. 4am Saturday morning came around very quickly, we were woke to the soothing sounds of birds (Kevin’s alarm  🙂 ) and unfortunately to the sound of rain outside which was not forecast. A nice group breakfast was had and we headed for the bus at 5:30am. I was surprisingly relaxed on route to the start and enjoyed the banter, I knew I had the fitness to get through the race so long as I took my time and kept to a comfortable pace. Off the bus and the first sprint of the day was to the portaloo’s, not because we really needed to go but because they were still lovely and clean  🙂 Photos taken, hugs given and best of lucks muttered it was time to start!!!!

The horn blew and we were off! I stuck to my plan and left everyone sprint off past me as I tipped away, I looked down at my watch to get an idea of what I was running, somehow it was set to miles and I have never ran in miles so I had no idea what I was doing and definitely don’t have the maths brain to convert miles to kilometres while running. I kept going anyway looking forward to hitting the trail where I am much more comfortable running. My tactic at this stage was to pick the person in front of me, pass them, pick the next person, pass them and carry on. I caught up with Terry and Dean on the run so decided if I could stick with them I’d have someone to kayak with. Dean pushed on but thankfully I stuck with him to the kayak and we set sail together, it was fairly choppy and tough going but got across dry and in good time, some pure guy in front of us went overboard and started the bog run at the same time as us so I met my first new friend to chat to on the bog run  🙂

I had been dreading how my legs would feel for this run but I was feeling surprisingly good and very comfortable, when we came on to the road on the way to bike transition I met the supporters club of Lisa and Sarah who gave me a great lift with their cheering so I picked up the pace a bit and as I was turning into the bike transition Aoife was just leaving on the bike so I was very happy with where I was in the race. I hadn’t been on the bike much so I knew it was just a case of get through it, eat and pray I didn’t get a puncture because I just had my regular road tyres on and I can’t change a flat!! I kept the same plan of just trying to pass the person in front of me, I was tipping away nicely, I past STL on the side of the road but didn’t realised he was punctured, sorry!!! I met my next new friend on the bike route, PJ, who I passed as he was trying to get his ham sandwich that was sellotaped to his crossbar off  I made it through the cycle route in one piece and so did the bike, as I came in to transition PJ arrived into transition behind me having had his sandwich and ready to tackle Croagh Patrick. We stuck together going up and he informed me that he was 69 and that this was his 12th year in a row doing Gael Force West and he hadn’t much training done so was hoping for a time of 5hrs 20, 4hrs 30 was his best time, I am in awe of this man!!! The usual speedies past me as I was on the way up and they were flying down Alan, Brian, Joe (who I roared at for food and he kindly threw a chocolate bar at me, thanks Joe!) As myself and PJ were slogging along we met Aoife close to the top and definitely not feeling any love for Croagh Patrick!! Summit achieved it was time to get back down as quick as possible, the legs were shaky and the brain tired so it wasn’t as easy as the training day but when I caught up with Phil and John I was secretly delighted with myself and how well I was doing (this feeling was not to last 😥 ). Back in transition I was happy with how my legs were feeling so took off on the bike, it was 10 minutes of nice and then just pure cr*p roads, I was running beside the bike, carrying the bike and half cycling half walking with it but finally made it back to the road. This unfortunately is where I lost all my bottle and melted the breaks going downhill and john and phil flew past me while also giving me a heart attack roaring my name as they past. The last cycle was a struggle back in to town but finally I was there and the person I had been waiting to see all day was in front of me, the man roaring at me to dismount  I ran towards transition with my bike and some stranger shouted at me to give him my bike and just run so that’s what I did. 5hrs 25 minutes, 7th lady home and it was all over. There was a great welcome from the GoTri gang as I passed the line and I won’t lie I was emotional. Delighted to see Alan home safe as well after having an amazing race!!!

It was a brilliant weekend, with brilliant people and great memories. Personally I was delighted with how well I had done, I had no expectations, no time I had wanted to complete it in but looking back now I know if I had got off my bum a bit more during the weeks leading up to the race and met the lads for training I could have done better which is frustrating. All the notes have been taken for next year, roll on Gaelforce 2018!!!!!!